Galicia is one of the 17 Community regions in Spain. An Autonomous Community, or Community region is a geographical are with the same history and traditions. I mean, with an independent identity, ruled by its own government.  Some of these regions have only one province, but others as, Galicia, have more. The autonomous government has full authority in important matters, as Health or Education, and even Tourism, among others.

Galicia is located at the northwest of the Iberian Península, above Portugal. The region is split in 4 provinces: A Coruña, Lugo, Ourense y Pontevedra. Provinces and capitals have the same name. However, the regional capital is Santiago de Compostela. The community has   2.700.000 inhabitants, and there are two official languages: Spanish and Galician. 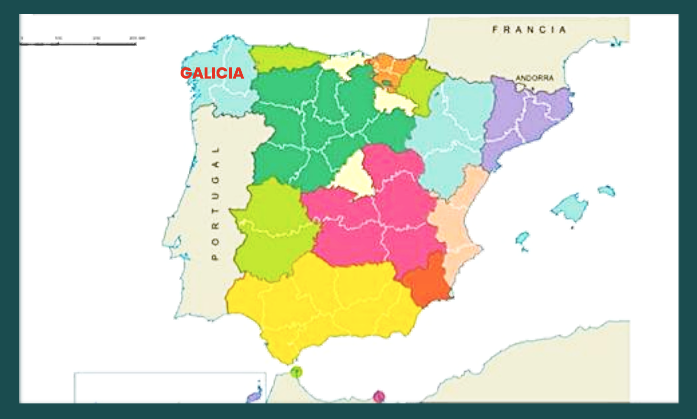 Is Galicia worth visiting?

Above all, it should be a must to visit Northern Spain when sightseeing the country. Why? You may ask. Because in Spain coexist two major landscapes and historical legacies. In general, we can speak of a greener area with a christian legacy at the north and a yellow ocher south of muslim culture.

International travellers usually go for Madrid, Barcelona and the Andalusian triangle (Córdoba-Granada-Sevilla), which means to make a safe bet. But they miss something important. Maybe because of lack of information, or time, or money. The fact is that northern landscapes and traditions are quite different. In consequence, if as a traveller you only visit the south, you will have a biased knowledge of the country.

Now, having different regions in the North, why should you visit Galicia? Why is Galicia Worth visiting?

Because of its history

” Europe was born pilgrimaging to Compostela”

It is said Goethe, poet, writer and naturalist, was the author of this quote. From the moment Saint James the Great’s sepulchre was found, during IX century, thousands and thousands of pilgrims crossed Europe to get to Santiago de Compostela. In those times, muslims were occupying most part of the peninsula.

Later,  religious, or religious- militar orders stablished important monasteries along the Way, modifying regional economies and societies. They built churches to greet and host pilgrims, they worked the land and provided medicines. Additionally, kings and lords ordered to construct bridges to help pilgrims crossing rivers, hospitals, paths. Pilgrims  started to prioritise routes with services, and this way new settlements will grow along the Camino de Santiago.

The contribution the Way made to the history and morphology in North Spain is undeniable. Santiago is not only the goal of pilgrims, but the capital of Galicia. To omit a visit to Galicia means to omit a great part of Spanish history and culture .

Because of its landscapes

Galicia is worth the visit because of much more. The setting of this history is spectacular. Galicia has an irregular 1.200 kms length coastline, creating bays, cliffs, estuaries and beaches. A paradise with more than 800 beaches and coves, enchanting forests, mountains that soften their relief when closer to the ocean…. and water. Rivers, sea, rain, mist, snow and dew.

If there are two colours defining Galicia, those would be  green, with as many shades as you can imagine; and grey. The grey of  granite, the grey of the sky. A picture is worth a thousand words.

How many tourist areas are there in Galicia?

If you would like to know how much could be to travel to Galicia, follow this link.

Ribeira Sacra: the secret of the monks